The best poutines in Quebec City in 2022 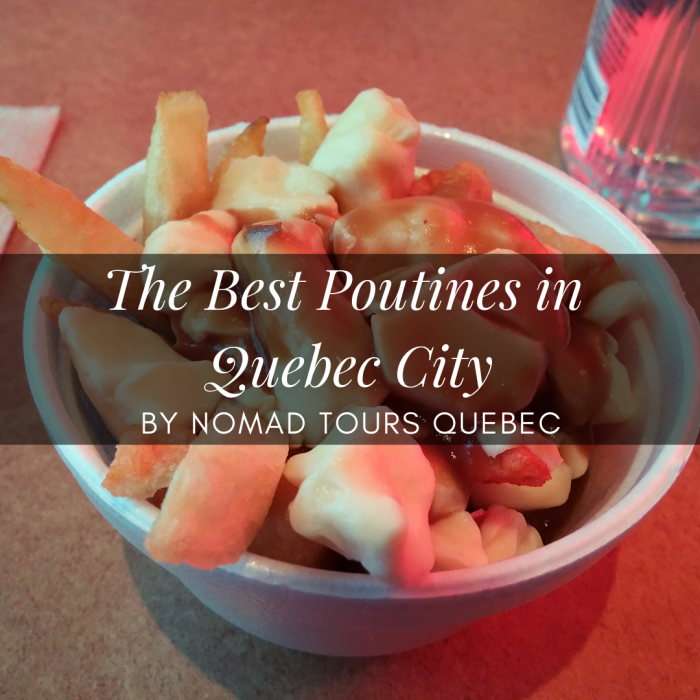 You can count on poutine to warm you up on a cold winter day or to fill you up after a night where you had too much drinks. So, where are the best poutines in Quebec City? This is truly a sensitive question! Everyone has their own opinion on the subject. For the purpose of this article, I will focus on Old Quebec and its surroundings. Let me share with you my personal favorite top best poutines in Quebec City.

THE 5 BEST POUTINES IN QUEBEC CITY

Chez Ashton is a popular fast food restaurant in Quebec City and it has been a locals’ favorite for decades. Many locals will say it’samong the best poutines in Quebec City because of its constancy. You can be sure that you are going to have a good quality poutine at Ashton’s. Ashton Leblond (only 21 years old at the time) opened its first “location”, a traveling snack cart, in 1969. The business grew in popularity and in 1979, Leblond was able to open a restaurant with a dining room open year-round. Today, the franchise has grown to include 24 restaurants in the Quebec City region. He is still the owner of the company today. There is one Chez Ashton in Old Quebec located on Côte du Palais Street and one outside the fortifications on Grande-Allée Street. For a classic poutine in its most basic (but delicious) form, Chez Ashton is the place to go!

Did you know?
A popular etymology is that the word “poutine” comes from a Québécois slang word meaning “mess”.

Did you know?
McDonald’s offers poutine as a permanent menu item across Canada. The McPoutine might be an “ok” choice as a drunk food but it’s definitly not the best poutine on the market!

On our first visit last summer at The Maison Livernois, Sebastien and I came for the gin tastings they offer. We had a blast! They have an excellent selection of quebecois gins, plus their own gin, the Jules-Ernest. The name La Maison Livernois is inspired by an influential family of photographers that used to own the building this restaurants is now in. It’s in this maison (house) that was founded the first photography studio in 1854. The decor of this restaurant evokes the early years of photography with multiples antiques and great design. It is chic but not snobby. On the menu are pub classics, but also signature dishes like their asian meatloaf (which Sebastien picked on our last visit). I personally tried their duck poutine made of homemade fries, gravy with foie gras base, cheddar curds, duck and cranberry sausage. I have never tasted a poutine that fancy! I can certainly say that it’s one of the best poutines in Quebec City. At least, among all the ones that I tried. WOW!