Quebec City’s Citadel and Changing of the Guard 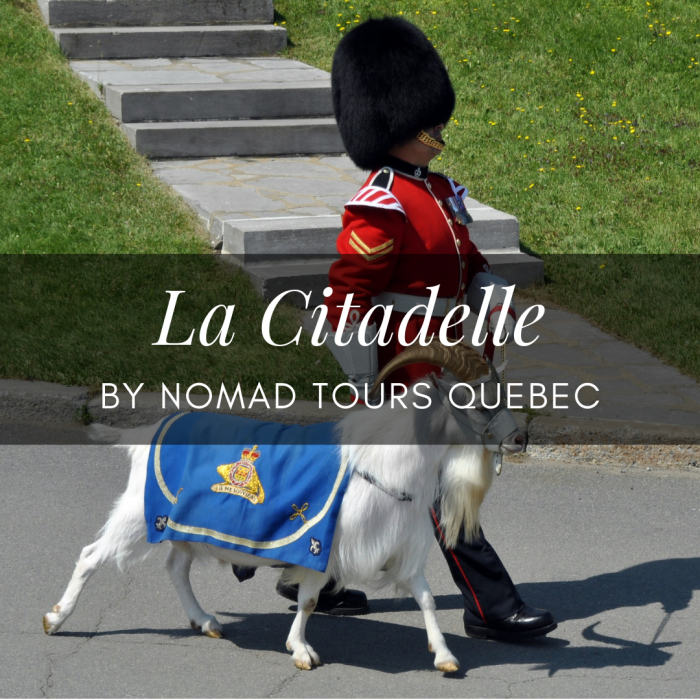 Like many travelers who are planning a trip here in Quebec City, you are probably reading many “top 10 attraction” or “top things to do in Quebec City” type of blog posts. The Citadel is without a doubt on all these lists!  Discover why the Citadel is a must-see on all my walking tours of Quebec City.


Disclaimer: I’m a native French speaker.  English is not my first language. So, I might have made a few mistakes in this blog post.  If I did, please let me know, its the best way I can improve!

Quebec City’s Citadel and the Changing of the Guard Ceremony

Why was the Citadel built?

The Citadel is part of the city fortifications. It is a short 10-minute walk from the Fairmont Château Frontenac and a 2-minute walk from the Parliament Building.  The Citadel is the biggest of its kind in North America. Built in 1831 on top of Cape Diamond, it was built as a refuge of last resort for the British army and to defend Quebec (and all Canada) from an American invasion. Its location and size earned it the nickname “The Gibraltar of the Americas.’’

Fearing a possible American attack, various military structures were built during the British Regime, including the Martello Towers (1805-1823) and the Citadel (1820-1832). Note that it is at the Citadel that we find the oldest intact gate of the old city fortifications: the Dalhousie Gate. . On the Lévis side, Forts 1,2 and 3 (1865-1872) were built. Fortunately, the Americans never attacked Quebec again.

The Citadel on my Quebec City tours

When I guide visitors from France, they are familiar with the shape of our Citadel. It’s star fort shape is based on designs of French engineer Vauban. Such type of Citadel can be seen in Lille, Arras, Strasbourg, Nîmes and many more cities across Europe. When I guide visitors from the United States, they are surprised to learn that the Citadel was built to defend Quebec from an American invasion and that the American Army attacked Canada twice before the construction of the Citadel.

View All My Guided Tours

At the time of the First World War, the Canadian Army’s official language was English. That means that French-Canadian did not want to join the army. It wasn’t easy, but eventually, the Canadian Army created it’s the first French-speaking infantry regiment known at the time as the 22nd Battalion. They have won several battles of honor and got the title of ”Royal”. The Citadel has been the Royal 22e Regiment’s home base since 1920. That mans that this fortress is still an active military base.  During summer, we can witness the Changing of the Guard Ceremony performed by the Royal 22nd Regiment.

As a student job, my boyfriend, Sébastien, was enrolled in the reserve army. Overall, he was in the military for about 7 years, which is not bad for s student job! For 2 summers, he had the opportunity to join the Royal 22nd Regiment and perform the Changing of the Guard Ceremony. Learning the drill of the parade and wearing that furry hat was not easy. In case you are wondering, yes, it really get’s hot under that hat! I must admit that when I attended the Ceremony to see him, I could never recognize him! These soldiers all looked the same!


Le saviez-vous?
The Royal 22e Regiment has a nickname?  ‘’The Van Doos’’ represents an anglicized pronunciation of the French for twenty-two, (vingt-deux).

Now you see why I talk about the Citadel on my Quebec City tours. However, I do not visit the inside of this fortress. This amazing place is a world of his own and there is much more to learn. There are so many hidden passages, secrets and things we still don’t know about it. That’s why I highly encourage that you do a full guided tour of this fortress. Their tour guides are amazing and very knowledgeable about it and Canada’s military forces in general. In summer time, you can even see the Changing of the Guard Ceremony, then join their guided tours. The Ceremony lasts about 35 minutes and the guided tour, about 1 hour.

Will I be showing you the Citadel during your next stay here? I hope so! You can contact me and book a Quebec City walking tour using the contact form below.
See you in Quebec City!